In a pampering-world where we keep the indoor temperature adjusted to perfection, lay on cushy beds draped in poofy covers, and wear soft clothing, exercise would seem like the most uncomfortable thing ever. Even when exercise earns us something good later, it still seems like the last thing we want to do. The list of excuses is endless, and with the pandemic closing all the gyms, it’s much easier to trick ourselves and not feel guilty about avoiding exercise. 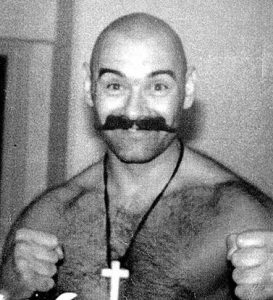 But if our only reason for not exercising is the lack of tolerance to discomfort, then we are nothing compared to inmates working out behind bars. Yes, you’ve read it right. With the restricted mobility and zero access to exercise equipment, inmates still manage to maintain a fitness regime. The most violent inmate in Britain, Charles Bronson, has even become a notable figure in fitness history. The jail is not an ideal training environment, but you see, Bronson still managed to get rid of the prison jelly belly.

While his crimes, violence, and robbery benefit no one, there is one legacy he left which we can all benefit from now and again- his dedication to stay fit and healthy in isolation.

In this article, we’ll detail Bronson’s peculiar approach to fitness and freely deploy it in the confines of our homes during this quarantine.

The fact that Bronson has spent decades in prison (mostly in solitary confinement) interested fitness fanatics of his fitness approach. It wasn’t as if he could mostly go out of his cell or work out in the prison yard for more than an hour. He had very limited equipment and space – all the reasons why his workout plan is incredibly inspiring and accessible to almost everybody.

Aside from that, people are also curious about how he views fitness. For Bronson, having superior athletic abilities is vital in surviving the harshness of prison. Sure, you could be beaten up, killed, or pushed around. But, you can also stand up for yourself and establish that you’re not someone other inmates could mess with. Most of all, keeping yourself in good shape is a good sign that you take care of your body and health.

Charles Bronson, formerly Michael Gordon Peterson, was born in the town of Luton, England. He had a normal childhood and lived happily with his family until he reach his teens. Bronson started getting in trouble like stealing things with his friends or engaging in occasional brawls. What started as petty crimes continued to escalate. At 22 years old, he got convicted of armed robbery. It was expected that he will be out in 4 years, but his violence in prison extended his sentencing for up to 7 years. During his confinement, his escape attempts consist of walking sluggishly toward the exit, taking the prison librarian hostage, and strangling another detainee.

After 7 years in prison, Bronson was released and became a bare-knuckle boxer. He joined boxing competitions around the East End of London. He seemed to enjoy the violence and showmanship of this sport. He even ups the stakes by fighting two opponents at once. His then promoter convinced him to change his name after an American actor who’s well-known for being tough. Unfortunately, the newly-named boxer’s career soon came to an end due to several more stints in prison for robbery. It wasn’t long before he had his freedom finished for behaving violently in prison, from taking hostages to causing deadly riots.

However, even with his life sentence, Bronson found ways to remain active and maintain his exceptional physique. His fitness journey attracted fitness enthusiasts from all around the globe.

Bronson has spent the last 44 years in prison and has married three times. He has also become an avid artist, inspired by a prison art teacher who took notice of his drawings. Bronson channeled his pain and confusion into vivid imagery of grotesque creatures. His art speaks so much about a violent man who’s only ever known jail. In honor of his favorite artist Salvador Dali, Bronson changed his name for the second time. He is now Charles Salvador, who claims to have given up the life of violence and wishes to be sent to an open jail.

To reach your first 100 push-ups, he recommends that you begin with standing push-ups then slowly lower your level every week. He estimates that it can take 12 weeks for you to get fully-ready for push-ups from the floor.

Bench Press: While those push-ups can translate into bench pressing ability, Bronson has been able to bench 130 kg ten times on his first solid weight bench.

Sit-Ups: Bronson can do 1,760 sit-ups in an hour- another remarkable record of his.

Fighting: Bronson can do 5 punches per second. He admitted to punching a man 20 times in 4 seconds during his 50s. His punches are said to be powerful enough to break even bulletproof glass. What’s more, his kicks are proven to bend heavy prison metal doors.

Since Bronson carries quite a bit of muscle around and has impressive strength records, you might think he has been taking vitamins and mineral supplements. The truth is that he only eats typical prison food- oatmeal, eggs, bread, potatoes, pie, beans, bread, stew, and fruit. No special diets at all!

Many writers have attempted to detail Bronson’s life, but one that has become his legacy is the 2007’s Solitary Fitness by Charles Bronson and Stephen Richards. This book focuses on his exercise routine, educating readers that exercise can be done without fancy gym equipment, steroids, and supplements.

For the most part, Bronson’s exercises consist of bodyweight movements, making the Bronson workout easy to follow no matter where you are. He noted that those who stick to the book’s training routines would achieve increased overall strength in just a few months.

In 2008, the story of Charles Bronson appeared in a British biographical crime film titled Bronson. The film starred Tom Hardy and was directed by Danish director Nicolas Winding Refn. In order to fully understand his role, Hardy met with Bronson in person. Bronson was so impressed by how Hardy managed to get in shape for the role and how good he was at imitating him. He even shaved off his trademark moustache so that Hardy can use it as a prop to wear in the film.

While some criticized the film for its violence, many praised Hardy’s performance as well as the film’s writing, direction, humor, and action sequences. Bronson was initially not allowed to watch the film. He said that if his mother liked it, then he would as well. Three years after the film first appeared on the big screens, Bronson was finally granted permission to watch it. He described the film as theatrical, creative, and brilliant. He liked Hardy’s acting so much that if he were to die in jail that day, he’s just happy to have lived on through Britain’s number 1 actor.

If you want to know all the details of how Bronson basically punched his way to fame, try watching the film.

Perhaps Bronson’s dedication to fitness, despite being in the most uncomfortable place of all, could somehow inspire us to start valuing our freedom and fitness resources.

There are 2 main parts of the Bronson Workout Routine:

As previously mentioned, Bronson often uses his inmates’ weight for increased resistance. For instance, he might take an inmate on his back while jogging around. He might do push-ups with the weight of 2 inmates on his back. Bronson’s targeted areas are mostly bodyweight-based. Hence, it is not difficult to scale these exercises to your strength or ability.

Despite the prison being the least ideal training environment, Bronson has maintained this exercise for decades and loves his daily workouts. This notorious criminal, quite literally, lives his days in prison through exercise.

The second half of his workout is performed in his cell. He starts his morning by performing 100 press-ups in a row. He’ll then rest for 2 mins before doing another 50 press-ups. As the day goes on, Bronson continues to perform press-ups. On other days, he might do the same stats with squats, shadow boxing, jogging in place, and other bodyweight movements in his cell.

In many ways, Bronson’s indoor routine boils down to commitment and devotion to being fit. There’s nothing complicated with his exercises, and the results are ultimately related to having an unwavering passion for fitness.

If you are keen on exploring a truly intense, bodyweight exercise routine, you should attempt HIIT.

HIIT means “High Impact Interval Training” and fundamentally alludes to short bursts of intense exercise followed by brief rest periods. The objective is to take yourself to the height of your cutoff points to amplify the benefits of the exercise. It’s likewise an extraordinary method to burn a ton of calories in a short period.

Much of the time, you’d replicate this multiple times over. Include a five-minute warm-up and cool-down, and you have a 30-minute long workout plan that will truly push your body and give you decent perspiration.

It is clear that the most prolific lockdown exerciser in Britain, Charles Bronson, is somebody who’s pushed the constraints of what fitness training can do and where one can actually do it. He is a testament to how overall wellness can be achieved no matter the living situation.

With the slowdown in modern life due to Covid-19, fitness training represents one of the main possibilities to reduce stress levels and anxiety disorders. The effects of exercise on the brain are fundamentally positive, making it an excellent therapeutic approach in mental health. Hence, keeping the body moving doesn’t just save us from falling into the ‘exercise excuse trap,’ but also strengthen the immune system and invigorate mental health.

The Charles Bronson workout routine can be advantageous for well-being; however, boundaries with volume and intensity must be observed. In general, these in-prison exercises can advance protection against infections brought by intracellular microorganisms, which is fundamental in this pandemic period.